Since 2018, the fundamental outlook has eroded in large part due to the US-China trade war and global geopolitical risks, though it should be stated that growth has somewhat stabilized. However, despite these threats, the US economy continues to grow amid a tight labor market and strong consumer spending. However, if either of these begin to lose steam, it could pose a serious risk to global growth and financial stability.

As such, housing data may start to become more closely scrutinized as 2020 rolls around because of the multi-iterated effect the data has on economic growth and CPI. Furthermore, it can also be a useful bellwether for consumer confidence, a key behavior signal which indicates how confident – or worried – the driving force behind the American economy is feeling.

How Does Housing Impact Economy?

Since a house is typically the biggest purchase a consumer will make in his or her lifetime, it serves as a helpful barometer of the prospective homeowner’s confidence. If the purchaser believes their current economic circumstances will not deteriorate or may even improve, they are more likely to take on a mortgage. Subsequently, a spending spree ensues as borrowers furnish their new home with appliances and other goods.

New homeowners typically spend between $8,233 to $10,601 a year into their new purchase, which, when iterated across millions of houses creates a multi-billion-dollar ripple effect. This helps push retail sales figures higher along with inflation. As a result, it could tilt the Fed to become more hawkish if the cumulative effect is significant enough to cause officials to consider adjusting interest rates.

There is also the controversial behavioral phenomenon known as the “wealth effect” which could compound economic growth. It suggests that people spend more as the perceived value of their assets – in this case a home – rises and pushes the consumer’s confidence higher. The S&P CoreLogic Case-Shiller Home Price Index shows housing prices collapsed at the end of 2018 around the same time consumer confidence plunged.

However, one of the biggest factors affecting the housing market is Fed monetary policy itself. In 2018, the Fed hiked interest rates four times, and during its tightening cycle, pending home sales plunged. However, around the same time monetary authorities put rates on hold, housing data began to pick up and started to gradually increase as the Fed cut rates throughout the latter half of 2019.

In fact, the pending home sales index on a year-on-year basis in 2019 clocked in its strongest reading since the end of 2015 amid the Fed’s easing cycle. Looking ahead, if the central bank continues to ease credit conditions, it could support the housing sector. However, the upside push from the Fed may be insufficient if consumer confidence during that same time plunges and people reconsider taking on a mortgage.

If housing data continues to show continual improvement, it could cool 2020 Fed rate cut bets and push equities higher along with market optimism and the US Dollar. Conversely, the Greenback’s attraction as an anti-risk asset may also fall if market buoyancy diminishes the desire to hold a haven when investors are prioritizing returns. As a result, demand for the US Dollar may fall. However, this dynamic might soon change. 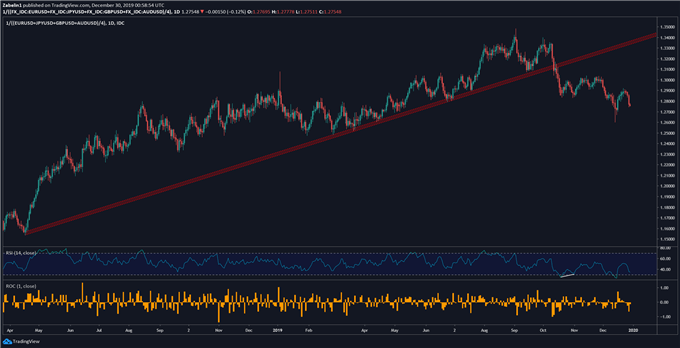 Note: The Greenback’s 18-month uptrend was largely coming from liquidity demand as fundamental uncertainty spooked markets. However, as the perceived outlook healed from ethereal improvements in market-moving themes like the US-China trade war, the demand for the USD plummeted and caused it crash through prior support.

SEISS grant four will cover the period of