See the DailyFX Economic Calendar and see what live coverage for key event risk impacting FX markets is scheduled for next week on the DailyFX Webinar Calendar.

The dog days of summer are here. Now that we’ve passed the Fourth of July holiday in the United States, markets begin the long slog to early-September US Labor Day holiday. The coming weeks will likely be marked by lower liquidity and lighter market participation – if this is a typical summer. But a quick check of the geopolitical landscape suggests summer 2019 will be anything but typical for traders.

Why should traders be expecting more volatility across markets in sumer 2019, more than in years past? We’d be hard-pressed to forget about Brexit, the changing European Central Bank leadership, North Korean denuclearization efforts, and accelerating Iranian nuclear proliferation. Yet none of these compare to the impact that the US-China trade war is having on the US Dollar, via Federal Reserve policy and the rising potential for interest rate cuts in the coming months.

Fears of a US economic slowdown thanks to the US-China trade war are proving to be the most influential factor in markets right now, by way of shifting US growth expectations and the collateral impact on Federal Reserve interest rate expectations. Indeed, it would appear that markets are signaling that the probability of a US recession is starting to increase.

US Growth Expectations Should Stabilize After June US Jobs Report

Based on the data received thus far about Q2’19, the Atlanta Fed GDPNow forecast is looking for growth at 1.3%. The next update to the Q2’19 forecast will be released after Wednesday’s US economic data. But traders should be looking for a slight improvement in the near-term, particularly after the better than expected June US jobs report on Friday. 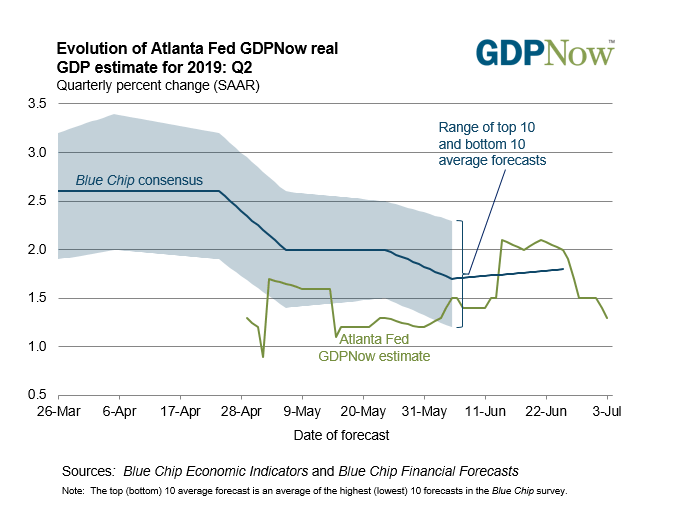 Evidence that the US labor market – the pillar of the US economy during the post-Great Recession recovery – remains sturdy will help ward off recession fears in the immediate future. Overall, US economic data momentum has been on a downward path over the past several months, with the Citi Economic Surprise Index for the US falling from its yearly high at 27.1 on February 1 to -55.8 today.

Even with the US-China trade war in a state of détente after the G20 summit in Osaka, Japan, market participants feel strongly that the Federal Reserve will act to shore up the US economy over the coming months – with the explicit purpose of staving off a recession and ending the longest run of economic growth in US history.

At the start of May, there was a 68% chance of 25-bps rate cuts by the end of the year, according to Fed funds futures. How drastic rate odds have changed in the past two months: 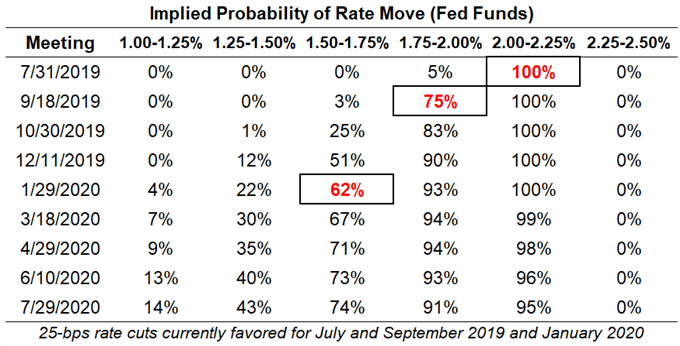 Using the US Yield Curve Inversion to Predict Recessions 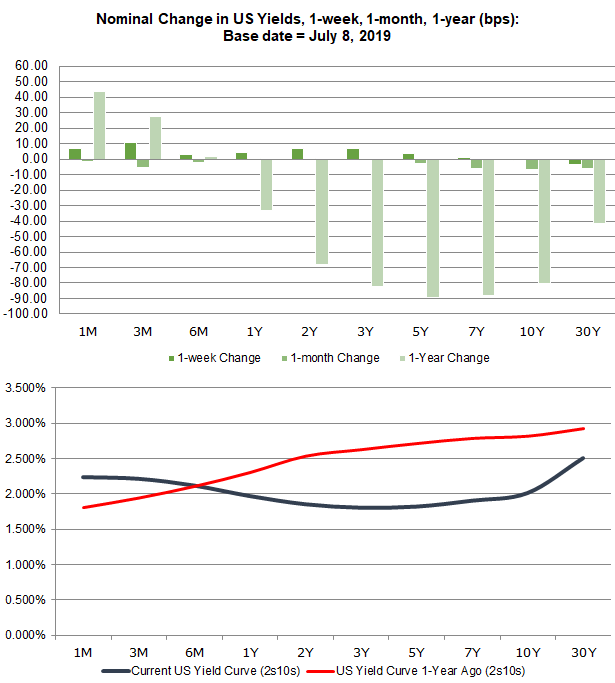 A flattening yield curve typically suggests an environment of rising uncertainty over growth conditions. In context of recent news and data, it stands to reason that the US-China trade war is proving to be the driving factor behind this shift in sentiment. The key question for traders to consider over summer 2019 is, “are the odds of a US recession rising?”

Why Does the US Yield Curve Inversion Matter?

The yield curve, if it’s based on AA-rated corporate bonds, German Bunds, or US Treasuries, is a reflection of the relationship between risk and time for debt at various maturities. A “normal” yield curve is one in which shorter-term debt instruments have a lower yield than longer-term debt instruments. Why? Put simply, it’s more difficult to predict events the further out into the future you go; investors need to be compenstated for this additional risk with higher yields. This relationship produces a positive sloping yield curve.

When looking at a government bond yield curve (like Bunds or Treasuries), various assessments about the state of the economy can be made at any point in time. Are short-end rates rising rapidly? This could mean that the Fed is signaling a rate hike is coming soon. Or, that there are funding concerns for the federal government. Have long-end rates dropped sharply? This could mean that growth expectations are falling. Or, it could mean that sovereign credit risk is receding. Context obviously matters.

Read more: Why Does the US Yield Curve Inversion Matter?

Duke University finance professor Campbell Harvey, whose 1986 dissertation explored the concept of using the yield curve to forecast recessions, has said that the yield curve needs to invert in the 3m10s for at least one full quarter (or three months) in order to give a true predictive signal (since the 1960s, a full quarter of inversion has predicted every recession correctly). With the 3m10s spread inverted, the probability of a US recession is rising. 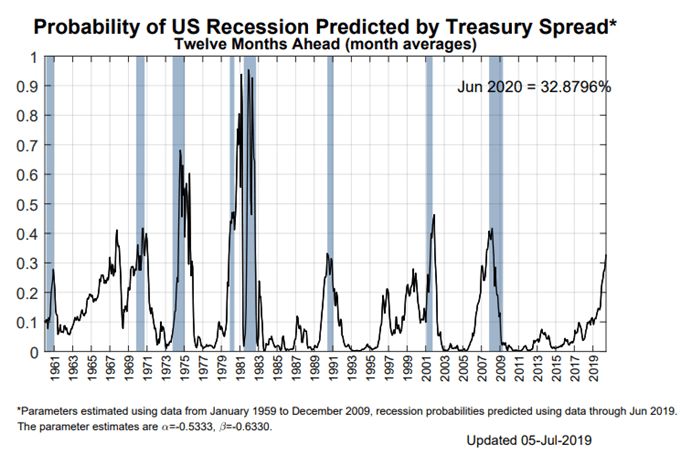 Using the 3m10s spread, the NY Fed Recession Probability Indicator is now suggesting a 33% chance of a recession hitting the US economy within the next 12-months. Thus lies a chain of events that traders need to monitor over the coming months: (1) will the US-China trade war deepen? (2) how will the Fed respond with rate cuts? (3) does the US-China trade war tip the global economy into recession?

Conclusions about US Yield Curve Inversion and Rising Recession Odds

Summer 2019 is unlikely to be the typically slower trading period that the middle of the year represents. Geopolitical tensions continue to rise across the globe, and the US-China trade war has yet to make meaningful progress towards resolution. As the path forward is uncertain, traders should anticipate rising volatility in FX markets; that EUR/USD implied volatility is at all-time lows is a dangerous red herring.

View our long-term forecasts with the DailyFX Trading Guides