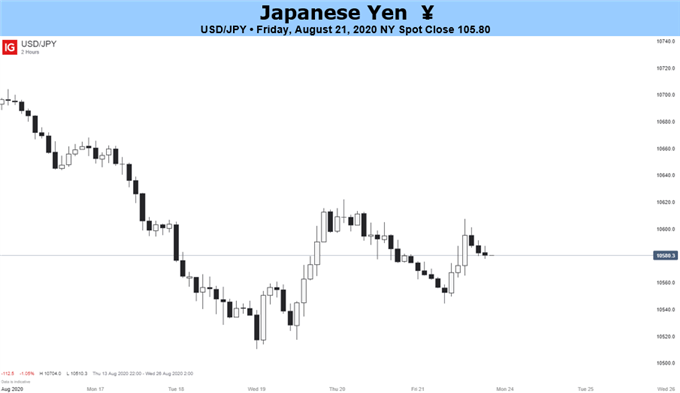 The haven-associated Japanese Yen’s sensitivity to volatility may buoy the under-fire currency in the coming weeks, if escalating geopolitical tensions and a stuttering global economic recovery notably sour market sentiment.

The market’s fear-gauge – the Volatility Index or VIX – has steadily drifted lower since peaking on March 18, as central bank’s around the world injected an unprecedented amount of liquidity into the financial system in response to the novel coronavirus pandemic.

This substantial increase in liquidity appears to have suppressed volatility for the time being, directing the VIX lower and in turn dragging the ‘safe haven’ Japanese Yen along for the ride.

However, the seasonal nature of the VIX suggests a resurgence of volatility could be in the offing. The volatility index has climbed 33.76% on average over the last five years in August and is currently down 5.1% heading into the tail-end of the month.

Moreover, a multitude of fundamental headwinds could potentially trigger a flight to safety as the summer lull draws to an end, with an expected increase in volume at the beginning of September potentially exacerbating market volatility and possibly fueling the Japanese Yen. 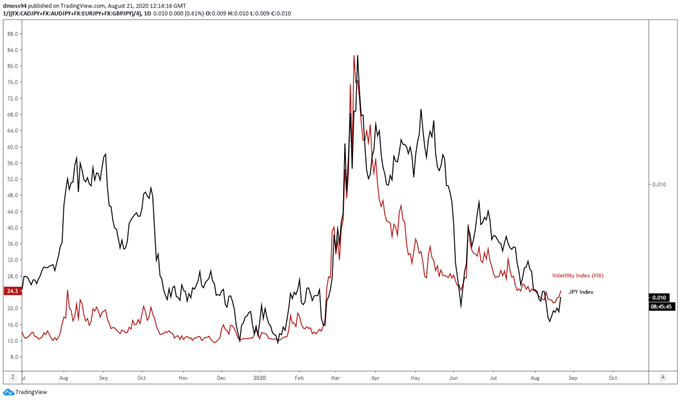 US-China Tensions Likely to Escalate Ahead of Elections

The surprisingly muted response seen in financial markets in the face of escalating US-China tensions may be indicative of a market dismissing the vitriolic rhetoric as mere posturing ahead of US elections in November.

Nevertheless, President Donald Trump’s recent measures prohibiting US firms from doing business with Chinese-owned WeChat and TikTok could incite a tit-for-tat response from Beijing, potentially resulting in similar measures being imposed on the likes of Apple (AAPL) and Microsoft (MSFT).

Moreover, the future of the phase-one trade deal signed in January looks anything but concrete after President Trump cancelled planned talks last weekend, stating that “I don’t want to talk to China right now” and that the “trade deal means less to me now”.

Get Your Free JPY Forecast

Although a complete breakdown in talks seems relatively unlikely given Beijing’s willingness to reschedule negotiations, further delays and cancellations will probably weigh on investor sentiment.

With that in mind, traders should continue to monitor US-China headlines, as a complete deterioration in trade relations is more than likely to induce a sustained period of risk aversion and drive the Japanese Yen higher against its major counterparts.

Counterbalancing the potential bullish drivers of the Japanese Yen is the recent surge in government bond issuance on the back of Prime Minister Shinzo Abe’s $2.2 trillion stimulus plan.

With debt issuance estimated to rise over 60% in 2020, lack of global demand may force the Bank of Japan to increase its purchases of Japanese Government Bonds (JGBs) to continue effectively implementing yield curve control.

Furthermore, consumer price inflation remains drastically lower than the mandated rate of 2% and could encourage the BoJ to expand its current stimulus measures. Core consumer prices in Japan stayed at 0% for the second consecutive month in July.

Therefore, accommodative monetary policy settings may limit the potential upside for the Japanese Yen during periods of volatility. That may potentially prevent a true reversal in the ‘safe haven’ currency’s decline from the highs of March until policymakers actively roll back existing stimulus measures.

Self Assessment tax return: Taxpayers urged to appeal penalties as HMRC 'gets it wrong'

SELF Assessment tax returns are due this week